This study by Maria Antonietta Breda documents for the first time an almost completely unknown aspect of Milan’s underground panorama: the underground spaces belonging to the Municipality of Milan that were used as public air-raid shelters during the early years of the war. The basis of the work is documentation produced by the Municipality of Milan on 5th October 1940, which contains 129 the profiles of 135 public air-raid shelters. Never before the catalog was published, with the exception of a couple of profiles.

The book is bilingual, written in Italian and English; 447 pages + 24 pages of color photos.

This testimony is made public to remind us all that our most precious asset is peace.

As part of Underground Archaeological investigations, numerous explorations have taken place beneath the City of Milan.

The origins of ‘Underground Milan’ lay in the history of the inhabitants themselves and their needs. Since the founding of the city Celt, over the centuries, the Milanese people have worked on the surface, establishing the basis for what would become the metropolis we know today.

In a mirroring of this, generations of diggers and bricklayers have perforated the subsoil to give life to underground architecture, or hypogean spaces, which reflect the various phases of construction.

This peculiarity of the subsoil as a ‘mirror of time’ is a prerogative of our whole Italian peninsula, islands included, where numerous civilisations have succeeded one another. It was also the subsoil that provided the response to the perils of air-raids during wartime.

And even in the underground structures of millennia and centuries old have been found suitable spaces for these shelters. Indeed, the underground rooms and basements (as well as some medieval «secret passages») were used as ‘makeshift air-raid shelters’.

This aspect of urban underground follows the topics covered in the III National Congress of Hypogean Archaeology, held in Massa in 2007. 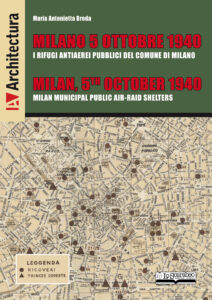